Dirty Snow was an action a situation a performance and an ephemeral disturbance of established notions about sculpture, dance, music as ritual before or after art.
The creation of a band in 1998 was driven by the nostalgia for a way of performing wile communicating (activating relations with the public on Ritualistic terms, exploring the borders between experience or spectacle/distraction)from the post-punk and a post-post modern romantic point of view.At a time when digital music, electronic sounds and dj sets where everywhere and bands where almost gone.

When Dirty Snow appeared with its traditional four person line-up and on its first live action at Five Years Gallery, it was a specific site Situation ,it was some how para-relational Art and para-Socially Engaged art too, because to create a space for ritual and mutual cathartic expression as punk-rock etc its also a social activity even if it touches the politics of what capitalism has relegated as just pure Spectacle/Leisure.

Cinemateque show at Five Years curated by Lucy Reynolds for the last week end
of the gallery at its site in legendary Underwood St in Hoxton .Given way to the hipsters and state agents to re-made the spaces as Lofts . During the week end there was a special day for music and film or better said Film over Music Players and Performers , selected by Lucy Reynolds , Including Harry Smith , Mary Ellen Bute etc.. In the video you can hear Esther Planas and Marc Hulson saying good bay and thanking every one who had been part of the project , plus Marc Hulson mentioning about the rest of the program on Cinemateque... It was 2002 ( ten years ago..)

Dirty Snow was conceived in 1998, initially to produce a soundtrack for the video works in Planas solo show Red Rum at Pelayo 1 in Barcelona. Following her subsequent move to London, Planas has presented a string of memorable gig/performances at events and opening parties (eg.Dark Pop at Five Years 2000) and made recordings for independent labels (Evensong, Underwood Audio), while gradually developing Dirty Snows sound from naive indie-noise to minimal post-punk /gothic pop. The band also continues to produce the music for Planas video and performance work
The obsessive repetition and disregard for narrative development or conventional song structure that characterise Dirty Snows music are mirrored in the editorial approach and (anti) design of Dark Star. Although distributed worldwide by the influential French company OFR system, Dark Star is nevertheless in many ways a wilfully obscure entity. Begun, like the band, in 1999, the publication was initially intended as a virtually private project a xeroxed notebook or diary to be handed out amongst friends. In spite of its presence now on shelves alongside the myriad style\culture glossies, it retains its elusive, secretive character any information contained within its pages concerning contents, producers and contributors tends to be both minimal and virtually illegible. Each issue (nos. 1, 2 and 3 have been published annually since 1999) presents itself without explanation or apology : 150 pages or more of meandering, playful, obsessive and ferociously lo-tech cut and paste, zeroxed imagery and graphic invention. The kind of no-holds barred, anti-design attitude and aesthetic which the so-called zeitgeist in mainstream publishing (see recent issues of Dazed et al) has only recently belatedly and somewhat politely begun to assimilate. Marc Hulson

A review of the performance of Dirty Snow in 2004 :
Review about gig in Manchester on the same tour

> Following with a much more mature sound and appearance were Dirty
> Snow. A band with an average age of about thirty, they
> bash ‘em out with the best of them. With the ‘wall of noise’-ness
> of ‘Sonic Youth,’ and the conservative gothness of ‘Siouxsie and
> the Banshees,’’Dirty snow` show a fierceness that would make
> children cry. Most striking is undoubtedly the leading lady. She
> looks like Shelley Duvall of ‘The Shining’ fame. Wendy Torrence
> armed with an arsenal of twisted, tortured writhing, gyrating
> ‘dance’ moves to send Jack Nicholson straight to hell. No
> discernible words came from her mouth, and if they did were hidden
> under the screams and wails of that wild banshee woman. But hey,
> who needs words anyway. The ‘Dirty Snows’ are not at all precious about
> their sound, giving it up for an energy that truly shakes and stirs
> the front woman. ‘Dirty Snow’ are not doing anything
> particularly new, if anything they are playing on old styles, but
> their energy is fresh, sincere and exciting to watch. It’s just a
> shame they burnt out after only 15-20 mins.
James Bridge Williams
The Dry Bar, Manchester 2/12/2004 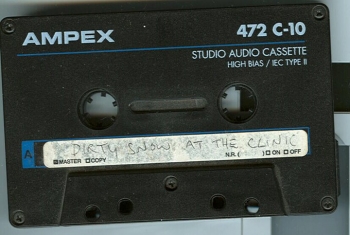 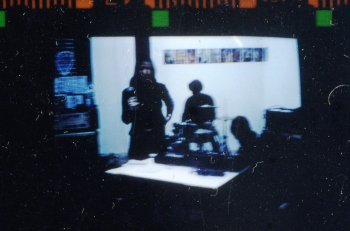 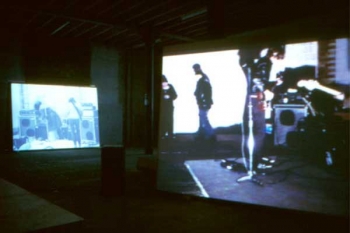 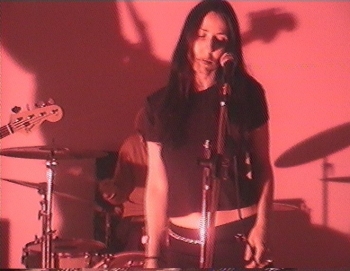 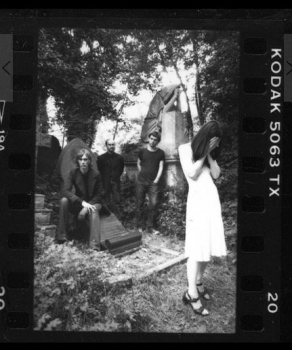 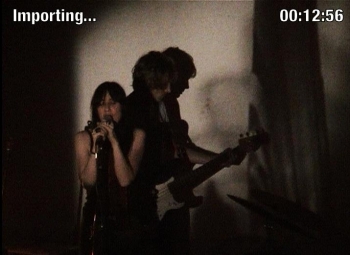 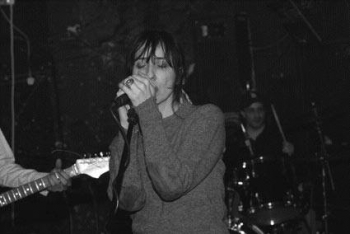 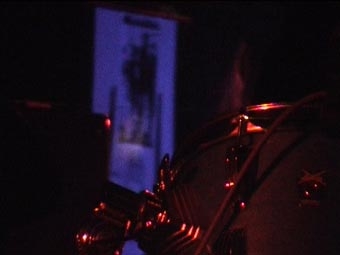 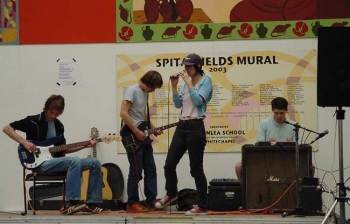 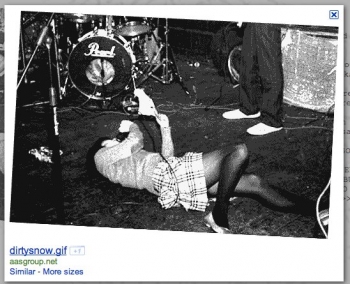 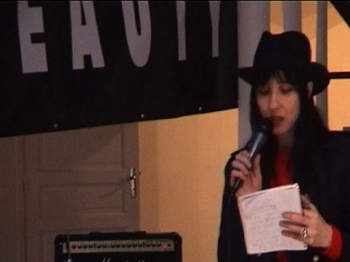 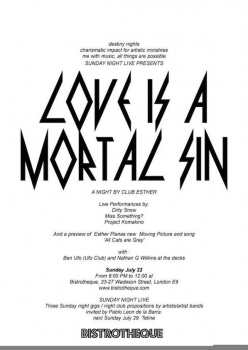 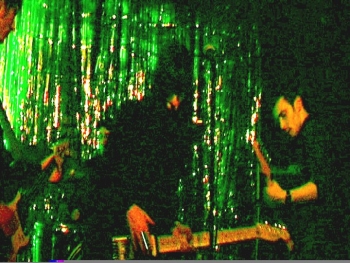 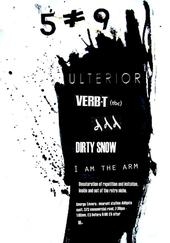 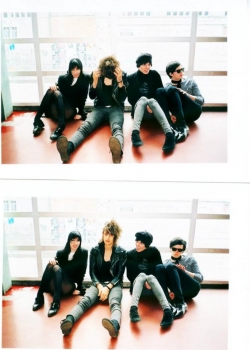 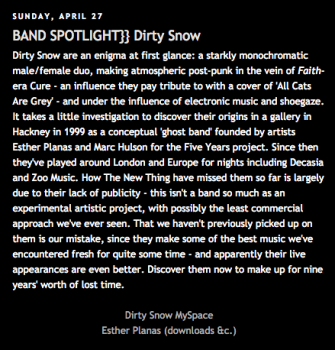 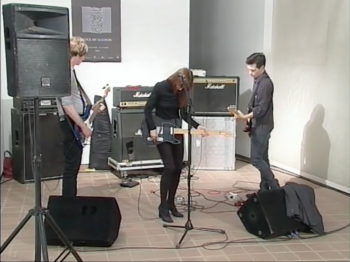 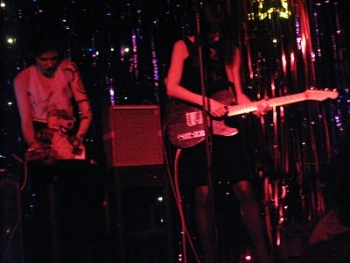 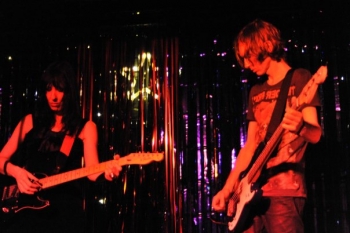 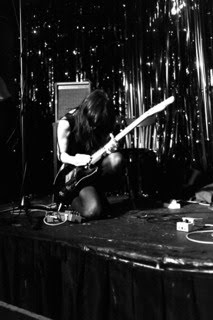 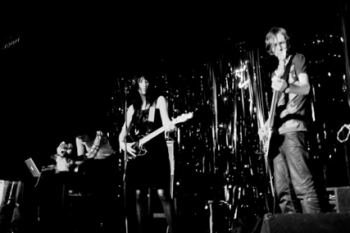 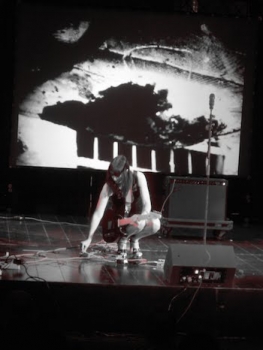 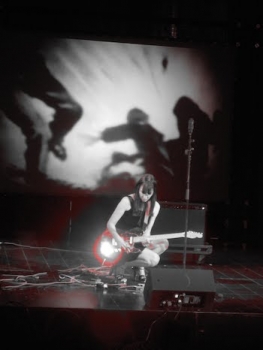 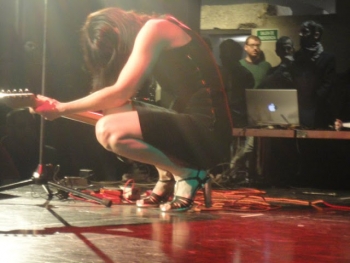