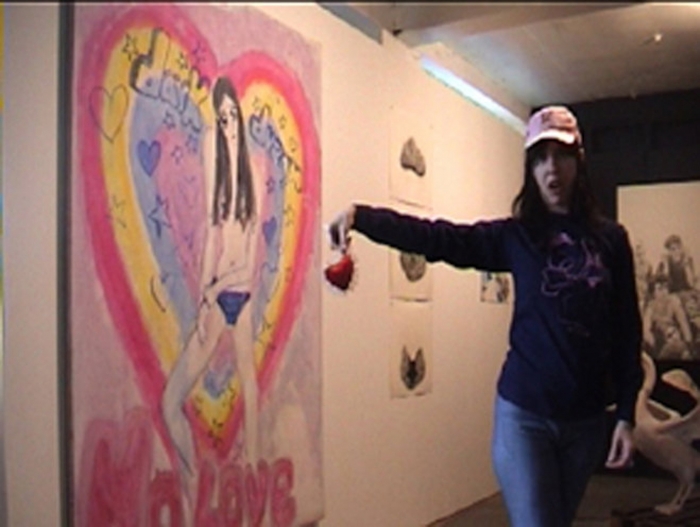 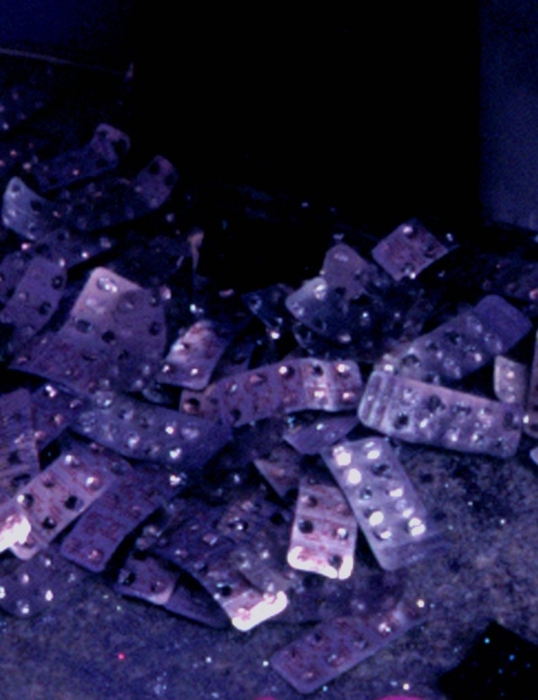 Lying down in her bedroom she stares out of the window, the music on the
stereo barely entering her consciousness. In front of her sits her journal,
filled with the daily irritations, obsessions and mundanity that consume
her. As she stares out of the window her mind wanders, constructing
fantasies that take her far outside of herself into the world of a glamorous
decadent star, writer, artist, cult celebrity. under her breath she calls out
to herself..
In the world of Esther Planas, inside the pages of Dark Star, up on the
stage with Dirty Snow, the interior life of a teenager is the model for an
artistic practice that covers music, video, painting, installation, drawing
and publishing. Reading Dark Star, with its dirty black and white pages
collaging together elements that seem to have been gathered from a life
spent hurtling through the detritus of pop culture, the experience is both
intensely personal and carefully manipulated. Like a number of other
contemporary artists, Planas takes on the space of the teenager as a place
through which to explore the obsessive, repetitious, creative urges that
cannot be held together by traditional genres - whether in art, music or
magazines. Just as Elizabeth Peyton paints her friends and celebrities with
the same breathless admiration, or Larry Clark shamelessly pillages the
bedrooms and lives of the cool kids he meets, or Collier Schorr photographs
adolescent boys and girls in ways that provoke the viewer to question their
own sexual identifications, Esther immerses her visitor (to describe oneself
as a viewer in this situation just seems to detached) in a multimedia
experience that demands an emotional as well as an intellectual engagement.
With a background in underground scenes in Barcelona and London, Esther
exposes the vocabulary of 'cool' with a surgeon's precision - poking and
prodding at its various incarnations with her cut-ups of comics, lyrics,
photographs, family histories and private fantasies.
In her installation at the Five Years Gallery in 2002 she transformed the
white walls of the gallery into a dimly lit space filled with beanbags,
incense, magazines, a record player at the ready, videos playing in the
corner. Inviting visitors to come in and make themselves comfortable, the
gallery space was undone and remade in to a play den, so that you could
recline, flick through a copy of Dark Star, whilst listening to a Dirty Snow
track on the record player. On the walls, Esther's paintings operated as a
living version of the collaged pages of Dark Star, with the atmosphere of
the gallery allowing their gentle perversity to induce daydreams, their
fucked up versions of fairytale happiness mixed in with a threatening
sexuality that echoes the intensity of teenage fantasy. Esther herself
appears as a manga-eyed coquette caught between being carried away by a
prince charming and being consumed by a sweetly depicted despair in her
numerous paintings, drawings, and reworkings of found images. Throughout her
work pills and tranquilliser packets are presented with the same wistfulness
as romantic cartoons and old photographs, providing a chemical edge to this
twilight world, evoking nights spent listening to music, talking earnestly,
a cocktail of legal and illegal substances trying to simultaneously maintain
a precarious mental equilibrium whilst at the same time pushing the body to
the edges of sensation. In this way the chemicals scattered across the pages
of Dark Star are equated with the CD covers, the repeated slogans and
phrases, the lovingly drawn portraits. All seem to be necessary ingredients
to create the emotional immediacy that Esther strives for across all of her
work.
A reoccurring figure in Esther's drawings is that of the manga cartoon bunny
My Melody, who appears as a character on the pages in Dark Star, and as a
disguise for characters in photographs. In a series of photographs of Esther
scantily clad, playing guitar, a My Melody style mask and ears are drawn over
her face. In another photograph a naked woman has her entire face blotted
out by My Melody, creating hybrid characters that are both sweet, absurd,
innocent, sexual and not a little disturbing. Like two of her influences,
Paul McCarthy and Mike Kelley, Esther uses toys and cartoon characters as
spaces in which to inject a perversity that is all the more shocking for its
bleakly humorous use of well-loved characters. Through different morphings,
My Melody is echoed in the bunny girls created from porno cards adorned with
black markered ears, and the many masks that cover the faces of the
seductive models (who include Esther herself), so that the blank, innocent
expression of the bunny becomes a disguise for an ambivalent sexuality and
complicity. As Esther writes next to a wide-eyed drawing of a girl sitting
on a chair, wearing only her pants: "I will be so nasty". In Esther's world,
it's difficult to know whether this is meant as a promise or a threat.