“A spectre is haunting the cynical overdevelopment that characterises London’s buy to leave property boom, the spectre of modernism!” #savegoldenlane

The project Spectres of Modernism, led by Stewart Home and curated by Clare Carolin about the polemic construction of a building in the Golden Lane State, which was a significantly representative of an uber-capitalist cold relation to the urban space's and care or respect for the concepts of the neighborhood. I was invited to produce a slogan to participate in the installation over a whole building and later, in the second phase of the project, parts of this work were shown in a charity event at Raven Row and were included in the ongoing blog of the project.

Spectres of Modernism is an installation of protest art banners emblazoned with slogans dreamt up by leading artists and writers including Turner Prize winners Jeremy Deller and Elizabeth Price and Booker Prize nominated author Tom McCarthy. The banners will hang from the balconies of flats in Bowater House directly opposite The Denizen, Taylor Wimpey’s planned luxury apartment block on the corner of Golden Lane and Fann Street, close to London’s financial centre. Slogans such as ‘Zombie Investors Take Stock’, ‘Homes for Heroes’, ‘children need sunlight to grow’ and ‘parasites will starve in this carcass of culture’, oppose the new development and draw attention to the failure of neo-liberal economics in Britain’s cities; its legacies of social cleansing, housing crisis, and damage to modernist architectural heritage, as well as the art-washing of urban devastation.

The Denizen has planning permission from the City of London council and will overshadow local homes, the adjacent Jewin Welsh Chapel, Fortune Street Park, Richard Cloudesley and Prior Weston Schools and the Golden Lane Children’s Centre. Sunlight is being stolen from children, residents and local workers to create ghost homes for investors who won’t live in them. The community in Bowater House who will lose up to 70 percent of the light coming into their flats have collaborated on the exhibition. The entire installation has been designed by Fraser Muggeridge Studio to appear as a colourful, high impact collage of architecture and text. The exhibition is curated by Clare Carolin.

Bowater House is part of Golden Lane Estate, an ensemble of grade II listed social housing designed in the 1950s and occupying a former World War II bombsite. Taylor Wimpey’s development entails the demolition of Bernard Morgan House, a classic example of civic modernist architecture completed in 1960 to accommodate 110 key workers; the new building has no social housing provision to replace any of what will be lost from this stock inside City of London boundaries. The Taylor Wimpey development is massively over scaled and completely out of keeping with world-renowned architecture it will be situated between, the Golden Lane Estate to the north and the Barbican complex to the south. Both these internationally recognised modernist icons were designed by Chamberlin, Powell and Bon.

Local art context: The northwest corner of the City of London — including Golden Lane and Fann Street — was recently rebranded Culture Mile by this local authority. Two Banksy murals appeared at the southern end of Golden Lane on the Barbican complex on 17 September 2017; this is 2 minutes walk from Bowater House. 5 minutes walk to the north on Norman Street, Burnhill House is flying hand painted protest banners against the Finsbury redevelopment plan; these were produced by local artists Riah Niaf and Liz Rever working with St Luke’s Community Collective.

Friday 2 February at Raven Row, 56 Artillery Lane, London E1 7LS, 6.30pm to 8.30pm. An evening of performances, readings and screenings to consolidate the protest at Bowater House against Taylor Wimpey’s The Denizen Development. With the participation of: Mark Aerial Waller, Stewart Home, Tom McCarthy, Anna Minton, Katrina Palmer, Chris Petit, Esther Planas, Bill Parry-Davies, Iain Sinclair, Claire Louise Staunton, Nina Wakeford and Lloyd Corporation in collaboration with students from Goldsmiths Visual Sociology MA and others. The evening will include an exhibition and sale of artwork related to the protest. All proceeds from the sale will go towards the campaign. 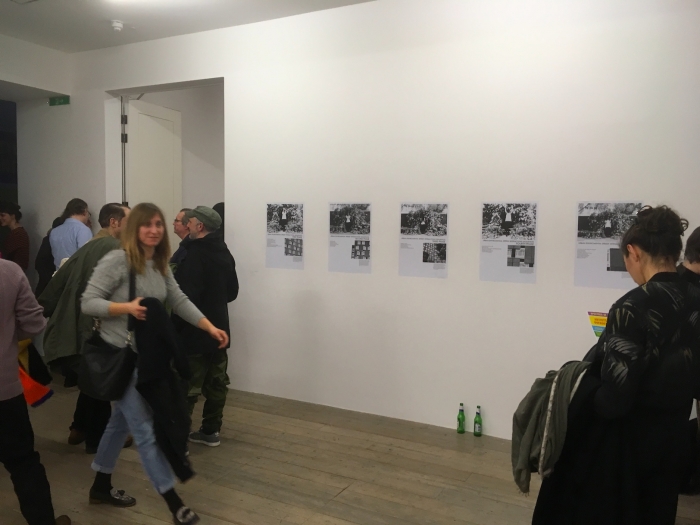